Italy is a fascinating destination with many scenic attractions, historic cultural attractions, culinary delights, and things to do. Here you can discover what to see, what to do, and places to stay.

Discover the world's best scenic drives and routes that offer something special for travelers looking for that out of the ordinary scenic experience. [ Read more ] 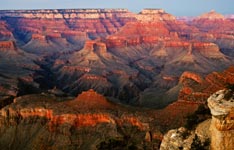 Discover where the ten best scenic views and vista's in the world are expected to be of interest to world travelers who enjoy photo safari's and experiencing and taking pictures. [ Read more ]

The climate of Italy with its mountainous and coastal regions and its great longitudinal extension is diverse. In the higher altitudes of northern mountainous region, especially during the winter months the climate tends to be cold, wet, and often snowy. The coastal areas of Liguria, Tuscany and most of the South the climate is typical Mediterranean.

Except for the winter months during the peak skiing season, the best time to visit Italy is from April to June and in late September to October. Temperatures are mild and the crowds are less than the peak tourist periods of July and August.

Places to See And Visit

Amalfi Coast - Known as Costiera Amalfitana, it is considered one of Europe’s most beautiful coastal locations. Take a scenic drive along the rugged coastline from Salerno to Sorrento . The narrow, hairpin turns meander the coastline through beautiful, scenic villages providing the traveler with a fascinating hair-raising, awesome, scenic motoring experience.

Apulia - Located on the heel of the boot along the Adriatic Sea, Apulia boasts of olive groves, picturesque seashores, Baroque towns and castles, white-washed trullo houses, vineyards with more than half of Italy's delicious table grapes, and outstanding cuisine. Popular Towns and cities to visit are Alberobello, Bari, Lecce "The Florence of the South", Matera, and Otranto.

The Dolomites - Located in the northern most area of Italy, the Alps, (a popular destination for skiing), the awesome beauty of this region is made up of a series of ancient coral reefs that rise several thousand feet above sea level and have the appearance of craggy peaks.

Italian Riviera - Located on the Mediterranean Sea (Ligurian Sea), this glamorous strip of of coastal villages are nestled that stake on the rocky shores. This region lies between France's Côte d'Azur and Tuscany.

Milan - One of Europe's top fashion capitals, shopping for shoes, clothing, and accessories are superior anywhere else in Europe, except Paris or London.

Rome - Rome is a vibrant, yet affordable major European city (compared to London and Paris) where you will get to see everything from the Roman Forum and the Pantheon to the Colosseum and the Baths of Caracalla. Rome is the largest Italian city and is a mecca of tourist attractions. Rome is also the home of the Vatican City, where the Pope lives.

Sicily - Sicily possesses beautiful Baroque architecture and a diverse landscape including Mt Etna, an aquamarine coastline, and the Parco Naturale Regionale Delle Madonie. This is an island to be visited with an adventurous mind and a love of food.

Tuscany - Known as one of the greatest repositories of art in the world, it is also a destination that offers a wide variety of things to see and do for people of all interests. It's scenic countryside can be enjoyed by hikers and cyclists. Food gourmets and wine enthusiasts. Her you can enjoy an unbeatable culinary experience of food preparation with local fresh fruits, vegetables, and cheeses. The popular towns and cities include: Florence, Siena, Pisa and Umbria.

Venice - A city at sea level, visitors marvel at the popular means of transport by ferry boats and gondolas. It is also a city that can easily be seen on foot along side hundreds of canals and over medieval crossing bridges. Don't miss taking a boat ride along the Canal Grande alongside the many historic buildings and under ornate bridges.

Bellagio - This charming town in located lake side on Lake Como. Enjoy your strolling the arcaded streets with small shops and in visiting the many lush gardens.

Capri - Located along the Amalfi Coast, take a boat ride around the island's rugged coastline, hop off and take in the beautiful romantic island.

Ravello - Located not far from Capri on the Amalfi Coast, this old world village has many historic buildings, dating back far back as the 11th century. It has a unique setting with awesome vistas looking down to the sea.

Sardinia - Long a mecca of the rich and famous, you can explore the scenic bays and sandy beaches lined with luxury beach resorts, and olive tree covered hills.

Spoleto - Located in the Tuscany region, the stunning architecture and the many religious buildings from the 13th century make this a memorable journey.

Emilia-Romagna - Emilia is west of Bologna, around the upriver Po Valley, and Romagna located east on the delta of the Po. The most notable wine of the region is Lambrusco.

Latium - (Lazio) located near Rome, the region is known for its white wines that include Marino, Est! Est!! Est!!!, Colli Albani, and the famous Frascati --- the wine of the popes and the people.

Tuscany & Umbria - Here are Italy's most scenic vineyards situated among the rolling scenic hills. Popular wines of the region include chianti red wine and the Orvieto white wine.

You would be missing out on the best of the culture of Italy if you didn't visit at least one or two museums. Italy is well known as a destination for its world class museums and art treasures.

The Vatican Museums - Located in Rome these museums are noted for their treasures accumulated over the centuries by the popes, and the famous Sistine Chapel.

National Etruscan Museum - Located in Rome, you can find the bronze and marble sculptures, sarcophagi, jewelry, and representations of mythical heroes from the the Etruscans, the ancestors of the Romans.

Uffizi Gallery - Located in Florence, this 16th-century Renaissance palace was the administrative headquarters for the Duchy of Tuscany when the Medicis controlled Florence. it is considered the crown jewel of Italy's museums.

National Gallery of Umbria - Located in Perugia, you can see some of the best of Italian Renaissance art from Tuscan and Umbrian with art work dating back to the 1200s.

Bargello Museum - Located in Florence, this structure was originally a fortress palace circa 1255, now houses some of Italy's most important Renaissance sculpture.

Academy Gallery - Located in Venice, this is one of Italy's largest collection of art works and is where you can see a collection of Venetian painting, exhibited chronologically from the 13th to the 18th century.

National Archaeological Museum - Located in Naples houses a huge collection of sculptural treasures from the Roman Empire with many of the displays excavated from Pompeii and Herculaneum.

Palazzo Sasso Via San Giovanni
Amalfi Coast, Ravello, Italy
This 43 room hotel is located on a cliff overlooking the Bay of Salerno.

Le Alcove
Apulia, Alberobello, Italy
Located In the heart of Alberobello, a UNESCO World Heritage site, this trulli styled hotel is situated at the main square of the city.

Hotel Villa Anita
Italian Riviera, Santa Margherita Ligure, Italy
A villa with a wide garden and large sunny terraces, is located near the harbour and the "parco naturale monte di Portofino", a starting point for walking tours. The restaurant and bar overlook the garden and are air-conditioned.

Hotel Spadari al Duomo Via Spadari
Milan, Italy
Located in the centre of Milan, a few steps from the Duomo, the Fashion District and the Teatro alla Scala,

Albergo del Senato
Rome, Italy
This 57 room hotel is located in the heart of Rome near the historic public square of Piazza Navona, the stunning Trevi Fountain, and the well known Spanish Steps.

Hotel Villa Carlotta
Taormina, Sicily, Italy
This luxury hotel is well located with views of the Mediterranean Sea and Mount Etna, and is close to the shopping area and the Greek/Roman ruins in Taormina.

Aia Mattonata Relais
Siena, Tuscany, Italy
This restored farmhouse dating from the 600's has been converted into a charming little Relais. It is situated near Siena located right in the heart of Tuscany overlooking a natural terrace, where in just one glance you can embrace the whole city from the Duomo to the Torre del Mangia. It has great views of Crete Senesi, the hills of Montalcino and the spectacular Monte Amiata.

Hotel Al Ponte Mocenigo
Venice, Italy
Conveniently located in the heart of Venice near Rialto/St. Marks Square . It has ten elegant rooms, combining traditional beauty and modern comfort, occupy two levels of a finely restored building in a tranquil, lived-in neighborhood that is rich in history and local attractions. 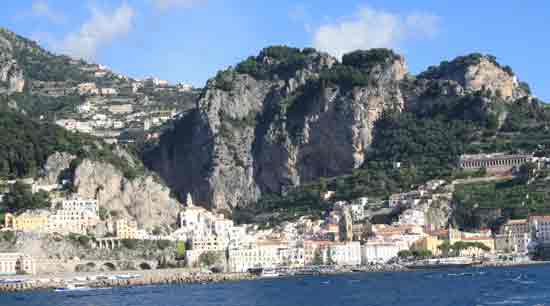 Italy's Amalfi Coast is one of Europe’s most beautiful drives and takes you along the rugged coastline from Salerno to Sorrento providing the traveler with a fascinating hair-raising, awesome, scenic motoring experience. [ Read more ]

The Best Europe Bike Tours are for soft adventure travelers looking to explore the lightly traveled back roads for fantastic scenery, charming villages, camaraderie, and some fun oriented exercise with the convenience of a guide. [ Read more ]